Owing to the difference of ideology among the ruling party, the government is unable to independently take up progressive programmes in full swing, Biren said. 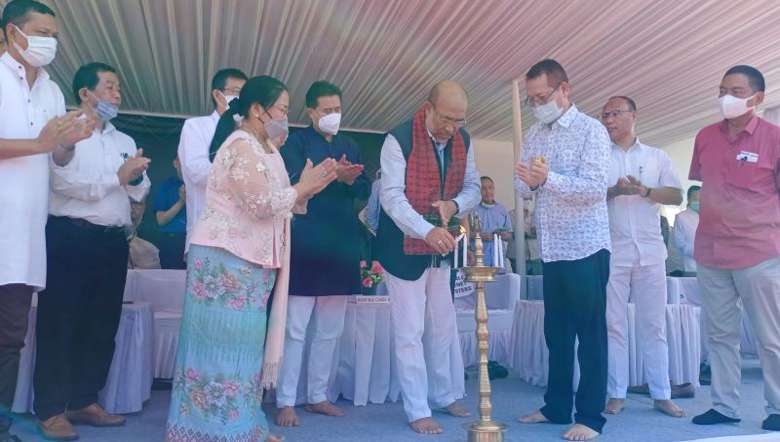 Manipur Chief Minister N Biren on Monday expressed his dissatisfaction on running the present coalition government of the state and called on the people of the state to support the BJP to get an absolute majority in the upcoming Assembly election for a more developed Manipur.

Biren was delivering his speech during the Go to Hills 2.0 programme held at Thomas Ground in Kangpokpi district. He said that due to the difference of ideology among the ruling coalition parties, the government was unable to take up progressive programmes in full swing independently.

However, the government has been giving its maximum effort in order to redress their grievances of the general public and for the development of Manipur, he added.

Unlike the past government, the present BJP-led government is there to not only give governance, but comes with a firm mission with innovative ideas to deliver fruitful and a peaceful life to the public.

"The government will not go beyond the Indian Constitution. What is given by the constitution will be fully protected by the government," he added.

"There is no question of minority or majority, we are living together since time immemorial. BJP is committed to maintain an egalitarian society," he further stated.

Biren also called upon all the indigenous groups of Manipur to keep the concept of "We are Indian, we are Manipuri and we are one."

Highlighting the various initiative taken up by the BJP-led government for the welfare of the public, he informed that a total of 22,781 individuals were enrolled in the CMHT schemes and out of which 2,271 had got free treatment facilities.

So far, 63 per cent of the households in Kangpokpi enjoyed the facilities of tap drinking water and 32,327 toilets were constructed in Kangpokpi under the Swachh Bharat mission, he mentioned.

Regarding the removal of Kangpokpi MLA Nemcha Kipgen from ministerial post, Biren clarified that "the government does not hold any grudge against her. Such steps was taken to maintain stability of the coalition government."

The chief minister, however, lauded Nemcha Kipgen for her efforts and initiatives in bringing great development in Kangpokpi.

The chief minister also asked the public to not take the present Covid scenario lightly until the daily positivity rate drops to zero per cent.

In order to effectively combat the pandemic, the government has installed oxygen plans in all the 16 districts and had increased manpower and infrastructures of healthcare facilities, he added.

During the today's Go to Village mission, various schemes worth Rs 46.34 crore were distributed to the beneficiaries of Kangpokpi district, he said, adding that various development projects worth Rs 1,593 is ongoing in the district.

Works Minister Th Biswajit while delivering his speech said that Northeast states has become a growth leader of the country under the various inclusive development works taken up under the leadership of Prime Minister Narendra Modi.

Asserting that the BJP government is based on democratic, integrity, peace and development, he said, "BJP will not leave anyone behind in implementing their various welfare projects."

Where their is BJP, peace prevailed, he said, adding regaining of peace and harmony in Manipur after the formation of the BJP-led government in 2017 is the genuine example.

He said as a special focus on the development of Northeast region, the BJP government has introduced the Act East Policy.

With such programme, Northeast states like Manipur had got the opportunity to connect with East Asian countries to exchange trade and commerce for economical growth, he added.

Reiterating that the state is rapidly speeding towards development, he called upon the people of Manipur to take the opportunity of various central and state sponsor schemes.

After witnessing a differently abled person attending the function, the chief minister immediately intervened and handed a wheelchair to the person.

The function was also attended by MP Leishamba Sanajaoba, council of ministers, MLAs and other top ranking officials of the state government.