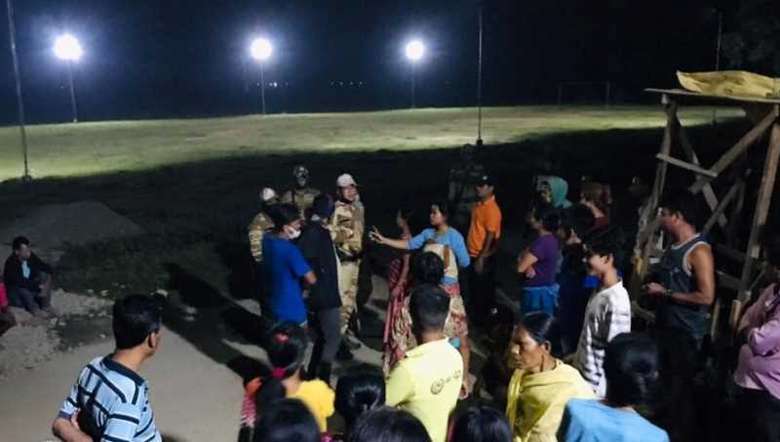 The armed BJP workers also allegedly tried to molest women during the incident and eight individuals who were present at the residence were injured, Usham Manglem told media persons. She said that around 500 individuals hailing from Wangjing, which is also the village of Wangjing Tentha MLA Paonam Brojen, drove down near his house on two wheelers and four wheeler vehicles at around 7:30 pm of Saturday. They parked their vehicles in front of his residential gate and at a playground nearby his residence.

Manglem further said that the miscreants then started firing several rounds of bullets towards his residence, during which, 10 people who were inside the residence sustained injuries. The injured persons were having a talk on election related topics when the gun attack was carried out.

Following the attack, the residents started alarming by banging the electric poles. On hearing the alarm, some women came out to check what was going on, to which the miscreants started chasing the women and tried to molest them. The miscreants also snatched away mobile phones from the women, he added.

Meanwhile, on getting information, a large number of Thoubal police commandos arrived at the scene to take stock of the situation.  Eventually, the commando personnel controlled the situation by dispersing the crowd from the scene.

Manglem further told media that the incident was unfortunate while claiming that earlier, different individuals came to his house thrice and warned him not to contest in the election.

Paonam Brojen probably attacked him on knowing that he will not win in the upcoming election, he added.

Manglem appealed to the parents and guardians of youngsters who were involved in the violence to keep an eye on them, or else untoward incidents may happen again. He also lamented that the police personnel present at the scene did not arrest any of the miscreants who were openly carrying guns.

Meanwhile, strongly condemning the alleged gun attack carried out by the BJP workers at the residence of Usham Manglem located at Kairembikhok Awang Leikai, a sit-in-protest was staged at Wangjing Hodamba, Papal, Khongjom and Kairembikhok on Sunday. The protestors displayed various placards in condemnation of the incident.