Farmers in Manipur have been using glyphosate-based weedicide to “kill unwanted weeds” without using any precautionary measures. 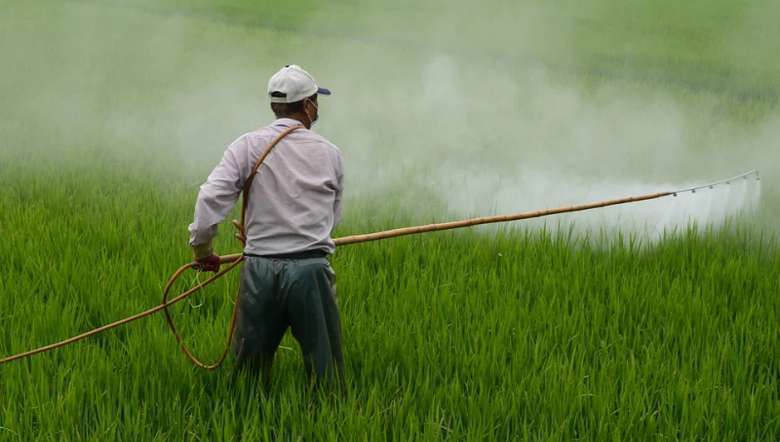 A farmer named Kheiruddin Shah (59) of Imphal East district whose farm is located at Yaralpat told the Imphal Free Presshis paddy field is infested with weed. “Except for Roundup weedicide, no other weedicides are effective in controlling them”, he said. Shah has been using the glyphosate-based weedicide for the last five years during the farming seasons.

His daily routine during the plantation season includes buying a 150ml Roundup bottle. One bottle can be used to spray his farm at least twice. He mixes half a bottle of the weedicide in a bucket full of water without resorting to exact measurement. Shah said while using or spraying the weedicide, he wears normal farming clothes and does not use any protective gear. He also explained that before sowing, he used the weedicide at the ridges so that unwanted weeds do not grow.

One of the shop owners, Purnimashi said there are different types of weedicides like Glycel, Roundup, Excel Mera 71, Hijack etc. It was revealed that glyphosate-based weedicides are on high demand as they supposedly “killed the weeds and even uproots them”. This year, the shop owner bought a number of Roundup cartons containing six 150ml bottles from Imphal dealers. She has sold all of them this sowing and transplantation season and next on farmers’ demand is now Glycel brand.

“I do not know the side effects of weedicides but they surely kill weeds. This is why I used glyphosate-based weedicides”, said Athokpam Achou (61) of Mekola, Imphal West district. He said every year he uses glyphosate-based weedicides but informed that they were of little use as weeds are rampant in and around my paddy field. “If I do not use these weedicides, then the paddy growth will be slower and unwanted weeds will take over my crops,” he said with a look of innocence.

“I have a 5-litre water pump-sprayer, on which I pour half of a Roundup bottle with full water and use the same for spraying on the field,” he said. He informs that sometimes he uses a mask while spraying and at other times he does not cover his face during the process.

In connection to the rampant use of weedicides, Imphal Free Press interacted iwth  chemical engineer Lamyanba Kshetrimayum from Kakching district. He said glyphosate is a non-selective herbicide, which means it will kill most of the plants.

“It prevents the plants from making certain proteins that are needed for plant growth. Glyphosate stops a specific enzyme pathway, the shikimic acid (an important biochemical metabolite in plants and microorganisms) pathway. While using Roundup brand, a farmer should take serious precautionary measures. A farmer should wear protective gloves/clothing to protect the eyes and the faces. If the same weedicide touches the eyes, it should be rinsed cautiously with water for several minutes.

“One should remove contact lenses if he or she intends to use the same weedicide and immediately call a doctor in case of emergencies. One should not forget to collect spillage and the same should not be released to the wider environment,” Lamyanba said.

He said the impact of the chemical weedicide on animals and humans were evaluated by regulatory agencies in the USA, Canada, Japan, Australia, and the European Union, as well as the Joint Meeting on Pesticide Residues of the United Nations and World Health Organization (WHO).

These agencies looked at cancer rates in humans and studied laboratory animals that were fed high doses of glyphosate. Based on these studies, they determined that glyphosate is not likely to be carcinogenic.

However, a committee of scientists working for the International Agency for Research on Cancer of the WHO evaluated few studies. These studies reported that glyphosate is probably carcinogenic.

In India, the consumption of glyphosate was 148 million tonnes in 2014-15, the highest for any herbicides. A similar study was carried out in 2010 by Indian scientists that had found that glyphosate-induced weedicides have carcinogenic effects. However, in Manipur there is no such study conducted so far.

In 2015, International Agency for Research on Cancer (IARC) studies under WHO concluded glyphosate is probably carcinogenic to humans. Following this, countries like France, Italy, and Vietnam have banned the use of glyphosate.

It may also be mentioned that in Kerala, glyphosate was banned beyond 90 days as illegal. As per the Insecticides Act, 1968, the Centre has the power to ban any agrochemical product permanently after following a certain procedure. However, states can also put restrictions on their sale and use for a maximum period of 90 days.

In Manipur, many farmers have started organic farming that does not use any chemical fertilizers. However, most of the farmers who are growing vegetables are rampantly using weedicides.

Kh Nimaichand, APO-MOVCDNER-Agri, directorate of agriculture, government of Manipur said that almost all weedicides or herbicides have side effects if they are wrongly used. There are pre-emergent and post-emergent weedicides.

“Most of the farmers use Roundup on small bunds separating the beds in a paddy field before sowing. It is not good to use the same in the ridge. If the harvesting season is complete, edible grass/herb like Peruk (Centella Asiatica, commonly known as Indian pennywort) will be contaminated with glyphosate,” warned Kh Nimaichand. He appeals to the farmers to consult experts before using any kind of weedicides/herbicides or pesticides.