Nadda arrived in Manipur on Saturday afternoon for a two-day tour in the state to discuss the various strategies of the party for fighting the upcoming Assembly election. 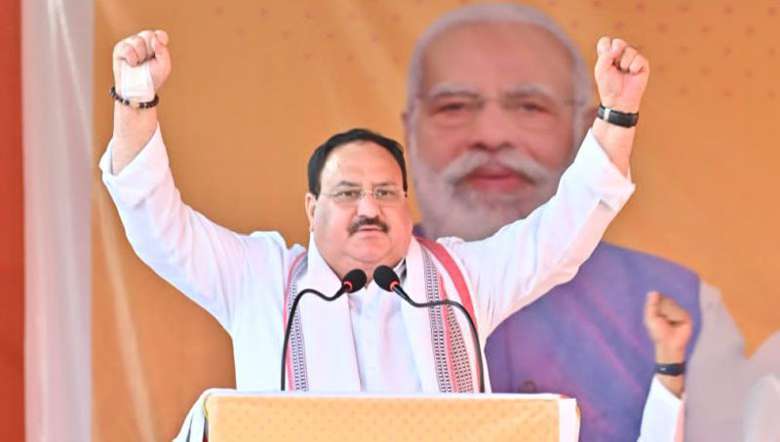 The almost five years rule of the BJP-led government in Manipur has inked a new chapter of development in the history of Manipur, said national BJP president JP Nadda in Manipur on Saturday.

Nadda was addressing the political gathering of BJP held at the Utlou SAI Ground in Bishnupur district after an interaction with the committee of Utlou boot level.

Nadda said the fruitful life which the people of Manipur are enjoying is the result of electing representatives of BJP in the last Assembly election.

"I can proudly say that the peace and harmony prevailing in Manipur currently is the byproduct of the BJP government which was formed with trust and support from the public," said the president.

With the formation of the BJP-led government in Manipur, the state is becoming self-reliant, with the various initiatives and welfare works taken up under the leadership of Chief Minister N Biren Singh and Prime Minister Narendra Modi, he added.

Highlighting various central and state sponsor schemes of the government such as Ayushman Bharat, CMHT, Jal Jeevan Mission, UJJWALA Yogana and others, he said successful implementation of those schemes are the "report card" of the BJP government.

He also mentioned that India has taken up the biggest vaccination and the fastest vaccination programme during the Covid pandemic as the government was really concerned about the wellbeing of public health.

Within five, six days, India will cross 100 crores in the number of vaccinated people and with the ongoing progress of the vaccination programme in Manipur, the state will soon get a tag of 100 per cent vaccinated, said the president.

Also, terming Manipur as the "new destination of sports", he asked the BJP Yuva Morcha of Manipur to take initiative to let the maximum youths from the state to participate in the Khelo India Youth Games.

Announcing that Imphal is ready to be included in the railway map of India, he said railway is not just connectivity but a track to development.

He said earlier, the Northeast states were ignored in terms of development or any other activities, however the BJP government under the leadership of Modi has started giving special focus to Northeast states.

Now Northeast states, especially Manipur has become one of the most progressing states with the blessing of Modi and effort of Biren.

Lambasting the Congress party for being a "timid and a silent" spectator in combating  the pandemic, Nadda said, "The only thing Congress knows is corruption, commission and criminalisation."

Pointing out the downfall and deterioration of the state during the Congress regime, he recalled the suffering faced by the general public during the frequent bandh, strikes and blockade which is now not happening.

Witnessing the warm welcome by thousands of public in Imphal Airport and on the way to Utlou, the president said he can clearly see that the people of Manipur are lending its support to the BJP government in their various development activities, said Nadda.

Biren while delivering his speech termed Manipur as the "soul of BJP" and explained why the public would not hesitate to choose the BJP in the upcoming Assembly election.

He recalled the implementation of ILPS in Manipur during the BJP government, which is a long pending demand of the people of Manipur.

It was imposed on the state after the Central BJP leaders understood the needs of ILPS to safeguard the indigenous identity and cultural heritage of Manipur, he added.

Biren mentioned that law and order prevailed in the state, everyone is experiencing a peaceful night's sleep and the bonds between the different ethnic communities of both hills and valley has been strengthened in the last four-and-half years' rule of the BJP-led government.

He further promised to give drinking water facilities to at least 80 per cent of the households of Manipur before the upcoming election.

Questioning who can bring such speedy positive changes in the state other than Modi? Biren said, "Whatever BJP is doing is for the welfare of the public."

Manipur BJP president A Sharda while delivering the welcome address said such visit by the president of the biggest political party (BJP) and interacting with the committee of Utlou boot level is a great privilege for the people of Manipur.

Such interaction by the president clearly shows that the party really cares for the public and is a people-oriented government.

Seeking the public support to eradicate the political party (Congress) who brought only sufferings to the public during their regime, she  assured that the BJP in Manipur will at least win 40 seats in the upcoming Assembly election.

The programme was also attended by Union Minister of State RK Ranjan, MP Leishamba Sanajaoba, ministers, MLAs and other leaders of the BJP.

Nadda arrived in Manipur on Saturday afternoon for a two-day tour in the state to discuss the various strategies of the party for fighting the upcoming Assembly election.

He will be visiting the Shree Shree Govindajee Temple on Sunday morning and inaugurate the BJP Manipur head-office at Nityapat Chuthek, Imphal West. Later in the afternoon, Nadda will interact with achievers, prominent citizens and celebrities of Manipur at the City Convention Centre in Imphal.