IFP Correspondent Kaybie Chongloi, Kangpokpi police and a social activist were awarded for contribution towards preservation and conservation of forest and wildlife during the wildlife week celebration in Kangpokpi. 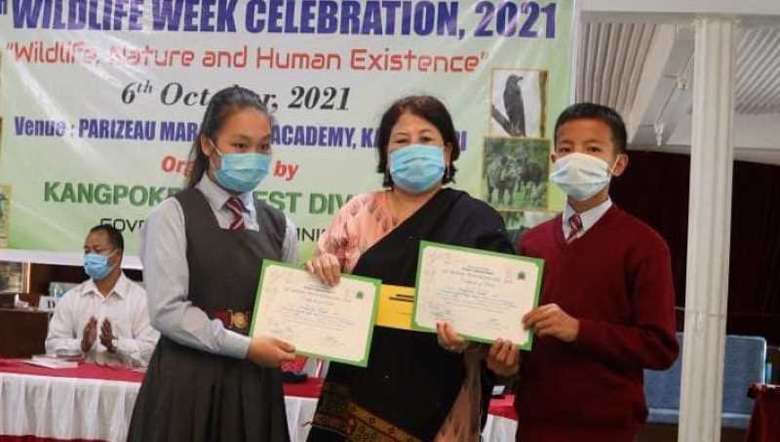 Prizes awarded to several students during the Wildlife Week celebration in Kangpokpi district.

Certificate of Appreciation was awarded to Kangpokpi Police, IFP correspondent and a social worker during the 66th Wildlife Week celebration in Manipur’s Kangpokpi district for their contribution towards the preservation and conservation of forest and wildlife in the district

As part of the weeklong celebration, the district forest division conducted an online slogan writing competition in two categories, essay writing for Classes IX to XII and quiz competition for Classes VI to VIII. The winners were given prizes during the celebration.

In the online slogan writing, Chongnunkim Khongsai of Eklavya Model Residential School, Gamnom Saparmeina got the first prize while Nengnunhoi Kipgen and Rahakhonai S of the same school got the second and third prize respectively in the category of Class IX to XII. Lenpithang Chongloi and Jeffrey Letminlen of MBC Higher Secondary School were awarded consolation prizes.

In an essay writing competition, Nempichong Misao (Class X) and Ngamngaisang Lunkim (Class IX) of Diamond English High School got the first and second prize while Paominson Lotzem (Class IX) of PMA got the third prize.