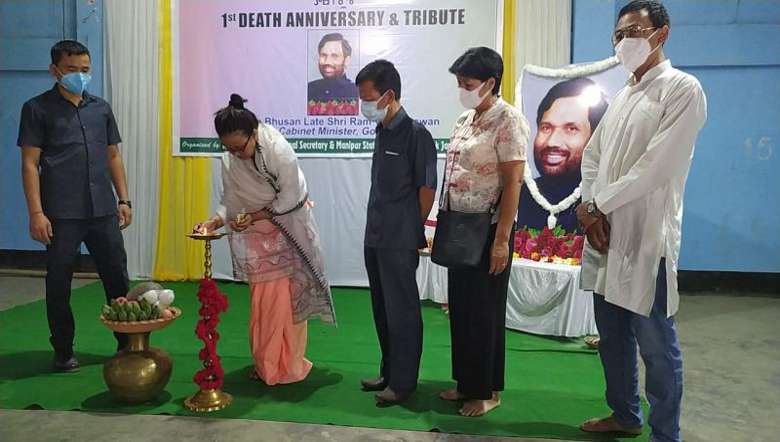 The Rashtriya Lok Janshakti Party (RLJP) will be producing its candidate for at least 15-20 assembly constituencies of Manipur in the upcoming Assembly Election, 2022, said national secretary of RLJP B Ruchida Sharma on Friday.

She was speaking to the media during the observance of the 1st Death Anniversary of Ram Vilas Paswan, who was the founder of Lok Janshakti Party (LJP) and a Union minister, held at the community hall of Soibam Leikai, Ayang Palli Road, Imphal East.

Ruchida said as of now RLJP has not decided for any pre-poll alliance with other political parties; however, forming of any pre-poll or post-poll alliances will be decided by its national president Pashupati Kumar Paras.

Floral tributes were offered to late Ram Vilas Paswan by the invitees who attended the observance.

Following the controversy over the leadership of LJP after the demise of Ram Vilas, the Election Commission of India had recently allotted new party names and symbols to Chirag Paswan and his uncle Pashupati Kumar Paras. While Paswan was allotted the name 'Lok Janshakti Party (Ram Vilas)' along with the election symbol 'Helicopter', Paras was allocated the name 'Rashtriya Lok Janshakti Party' and symbol 'Sewing Machine'.

Earlier, ECI had put a freeze on Lok Janshakti Party's name and symbol.