Give the CM a free hand

IFP Editorial: The issues surrounding the Athuan Abonmai murder does not end with compensating the family or whatever inquiry or investigation is being taken up. The political will of the BJP-led government and Centre has to go through an ‘Agni-Pariksha’ this time. 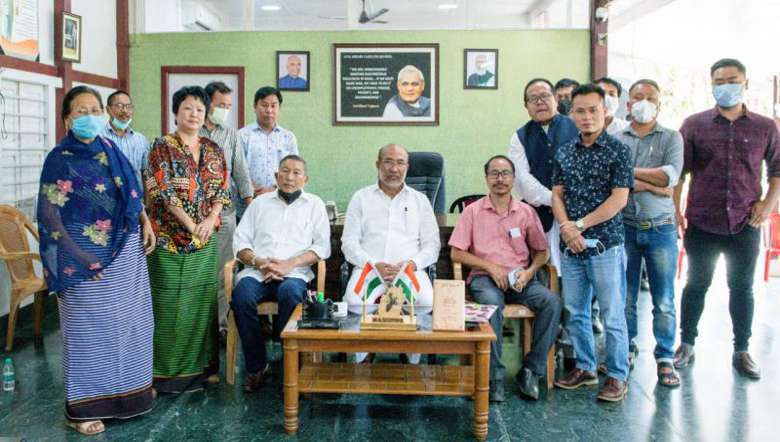 After several rounds of talks and a 24 hour long Manipur shutdown, the JAC has come to terms with the state government to end the agitation. The state has agreed to initiate an inquiry into the facts and circumstances leading to the death of Athuan Abonmai, and to fix responsibility thereof, to be conducted by an officer, not below the rank of an Additional Chief Secretary and completed within the time-frame of three months at the earliest. The inquiry will be independent of the investigation to be conducted by the NIA, and the findings thereof may be submitted to the NIA. The eldest son of Abonmai will be appointed to the post of Sub Inspector of Police in the Manipur Police Department and an amount of Rs 10 Lakh will be paid as compensation to the next-of-kin of Athuan Abonmai.

Meanwhile, two suspects arrested by police have been remanded to police custody till October 15 for further investigation. However, media reports still differ on the complicity of the two suspects or the identity of the particular group they belong to. As we said before, the said reports seem like a smokescreen to divert the attention of the general public from NSCN (I-M). From Day One, the possible involvement of NSCN (I-M) in the crime was on everyone’s lips as Athuan Abonmei is known for his consistent baiting of NSCN (I-M) and open support for the territorial integrity of Manipur in his public utterances. If not NSCN (I-M), which other group has the motive in silencing him? Even as Chief Minister N Biren Singh admitted security lapses, there is something more than which meets the eye in the brutal killing of Zeliangrong leader and politician Athuan Abonmai, as we said before. Even as the hill-valley divide had been played up in view of the ensuing state assembly elections, the Chief Minister went ahead with his Go to Hills 2.0 mission besides some resistance in some circles. A singular motive behind the killing of Athuan Abonmei could be his support for the renewed Go to Hills campaign and NSCN (I-M) baiting. The NSCN (I-M) through its political proxies and CSOs had been upping the ante to refresh the uneasy relation between the hill and valley, in recent times.

Besides suspending several policemen, it has also transferred the DC and SP of the district. Interestingly, when the Abonmai JAC came up with a demand for suspending the two high-ranking officers, some civil groups began to raise objections to the demand. Although their possible complicity in the murder seems far-fetched, they had a responsibility to ensure safety of not only the Chief Minister and other VIPs but the general public attending the functions, given the objections from various quarters. Who knows a bomb could have gone off to scare away the public from attending the functions? Anything is possible. So, whenever public functions are under threat it is imperative for security agencies to look out for the safety concerns of the general public and shed the myopic view of protecting VIPs only. Again, the issues surrounding the Athuan Abonmai murder does not end with compensating the family or whatever inquiry or investigation is being taken up. The political will of the BJP-led government and Centre has to go through an ‘Agni-Pariksha’ this time. Officially, the ceasefire with NSCN (I-M) does not extend beyond the state of Nagaland. But unofficially, everyone knows that there are ‘noted’ camps within the territory of Manipur and their writ runs large in the hill districts. For example, the existence of a NSCN (I-M) camp at Bunning Wildlife sanctuary in Tamenglong district, where the state forces were reluctant to go. Like this, the insurgent group has camps in most of the hill districts and so it can operate at will. The Athuan abduction in broad daylight amidst heavy security is one such example. Perhaps, it is an indicator of how things could go in the ensuing 2022 state elections. It would be wrong to presume that the BJP higher-ups have not considered this reality. Yes, things are very delicate right now as the Centre does want to disturb the present status-quo in the love-hate relationship with the group. But, we simply do not understand why it should stay in the hand of the state BJP Chief Minister in dealing with the matter on his own and will.