Network of about 3,000 testing labs were created from just one testing lab, before the pandemic, the prime minister said. 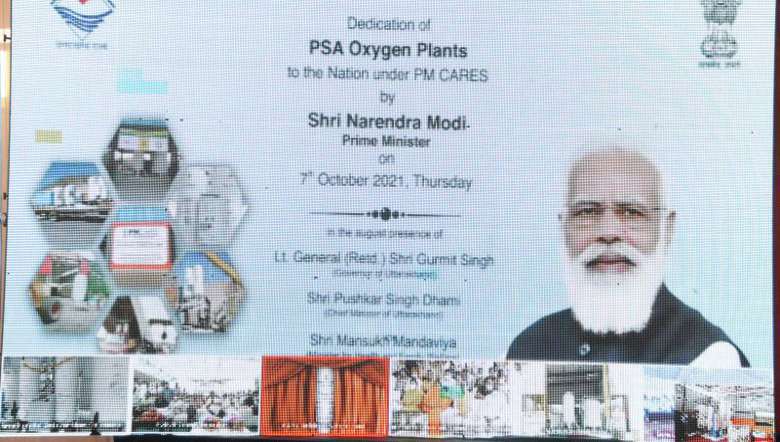 Addressing the gathering, Prime Minister Narendra Modi expressed happiness that from the land where life-giving forces like Yoga and Ayurveda gained strength, today, oxygen plants were being dedicated. The day also coincides with the day on which Modi was sworn in as the chief minister of Gujarat for the first time, 20 years ago.

The Prime Minister said the facilities which India prepared in a short period to fight the Coronavirus pandemic, shows the capability of the country. Network of about 3,000 testing labs were created from just one testing lab, before the pandemic, he added. India has transformed from being an importer to an exporter of masks and kits. Facilities of new ventilators were made available even in remote areas of the country, the Prime Minister said.

India has made rapid and large-scale manufacturing of Made in India Coronavirus vaccine. India has also implemented the world's largest and fastest vaccination campaign, he said and added that what India has done is a symbol of the country’s determination, service and solidarity.

PM Modi said, in normal days, India used to produce 900 metric tons of liquid medical oxygen a day. As the demand increased, India increased the production of medical oxygen by more than 10 times. He added that this was an unimaginable goal for any country in the world, but India has achieved it.

The Prime Minister remarked that it is a matter of pride for every Indian that 93 crore doses of COVID-19 vaccine have been administered. Very soon India would cross the 100 crore mark. He said India has shown the way to the whole world by building the Cowin platform that shows how vaccination is done on such a large scale.

The Prime Minister said now the government does not wait for the citizens to come to it with their problems and then take any action. He said that this misconception is being removed from the government mindset and system. Now the government goes to the citizens. The Prime Minister noted that till six-seven years ago, only a few states had the facility of AIIMS, today work is being done to take AIIMS to every state. He said that India is moving fast from just six AIIMS to build a strong network of 22 AIIMS. It is also the goal of the government that there must be at least one medical college in every district of the country.

Speaking to media persons on the sideline of the function, N Biren Singh on behalf of the people of Manipur expressed gratitude to the Prime Minister for sanctioning PSA Oxygen Plants for all the 16 districts of the State under PM CARES Fund. He said that with the intervention of the Prime Minister and the assistance from the union health minister, the COVID-19 pandemic is now almost overcome in the state.

It may be mentioned that apart from the 16 PSA Oxygen Plants set up under PM-CARES, the state government has also installed another six PSA plants at different medical facilities with funds from the Tribal Affairs and Hills department. In addition to that, the State has also installed two PSA Plants of 1000 LPM for JNIMS and two Liquid Medical Oxygen (LMO) tanks of 10 KL and 20 KL at Porompat.