When Vice President Venkaiah Naidu visited Imphal many roads in and around the city were clogged with traffic congestion as ordinary vehicles were diverted from the routes the VVIP was travelling. 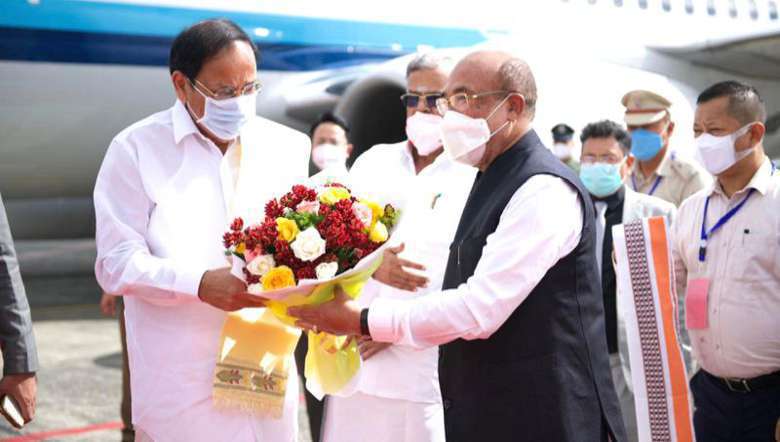 MANIPUR POLICE has always a strange way of regulating traffic in Imphal city, more so during VVIP visits and their movement. Entire stretches of major roads in the city are completely blocked during the visits of Union ministers, thereby causing extreme inconveniences to the general public. Now, with the ensuing state assembly elections scores of BJP ministers have started coming down to Imphal and it will go on till the elections. These visits will throw traffic out of gear in Imphal. On Tuesday, when the Vice President of India Venkaiah Naidu visited Imphal many roads in and around the city were clogged with traffic congestion as ordinary vehicles were diverted from the routes the VVIP was travelling. One whole day, the general public was made to suffer on the streets. But, such unimaginative management of traffic is not a recent phenomenon or of the BJP regime. This has also happened during the Congress rule and spells of President’s Rule. In the name of security considerations, such abuse of public space and roads had been happening, since long and traffic management or regulation is yet to come out of the security cocoon which negates all other considerations.

The main culprit behind traffic congestion in Imphal is roadside parking. In most cities across the country and around the world, it has been made mandatory for every commercial establishment to create their own parking spaces. Roadside parking have been banned almost everywhere, in an effort to decongest the roads and facilitate free flow of traffic. We are of the opinion that, roadside parking should be banned not only in the commercial zones, but in residential areas also. In many parts of Imphal, one will find vehicles parked in the main roads and leikai roads. Perhaps, the time has come for the government and municipal authorities to enact a law to prohibit vehicle parking on all roads and to make it mandatory for every vehicle owner to have own parking spaces for their vehicles in their Ingkhols or rent commercial garages. We have to understand that there are two parking modes. One is short duration parking for a few minutes to avail some services and buy something. The other is idle parking, which should be completely banned. Shop owners, salespersons and people living on both side of the road are the main culprits for idle parking. It is happening in almost all commercial areas in Imphal city. Instead of availing their own parking spaces, these commercial establishments encroach upon the footpath also for display of their wares and the adjacent public road for parking of their staff vehicles and of the shoppers.

Coming back to the issue easing traffic congestion, we now have a full-time SP (Traffic) tasked with the job of ensuring smooth flow of traffic on the roads. But, the security mind-set is still out there dictating terms as it is under the Police Department. Whatever measures are being taken up or training given, those in charge of traffic needs to shed the security mind-set first. As Imphal is at the threshold of becoming a Smart City, one needs to be imaginative and innovative even in terms of managing traffic. And it has to be a multi-departmental initiative and not of police alone. The phenomenal increase in number of vehicles in recent times have also to be considered. Once again, we would like to flag the issue of making the entire stretches of Paona Bazar and Thangal Bazar pedestrian-only streets. Pedestrian-only streets prioritize people and are typically most appropriate in corridors with commercial activity on both edges of the street. The pedestrian volume is high in these streets and so vehicular traffic should be restricted.