The village council charged that headman Yaruingam had replaced the names of five old aged pensioners with the name of his friends citing that all the beneficiaries have died though they are still alive. 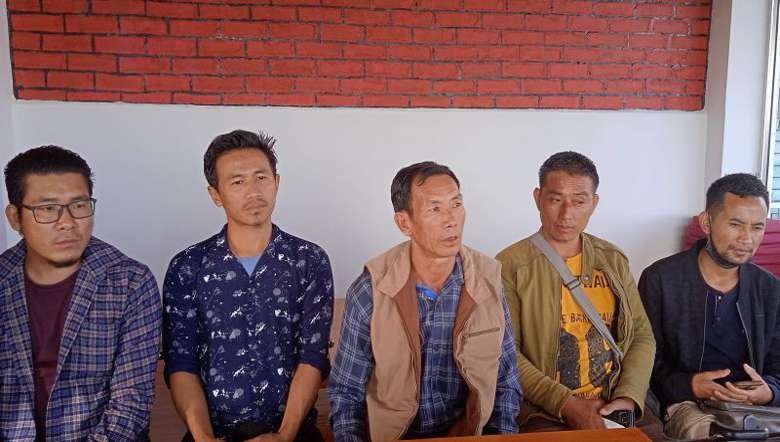 The Soraphung public forum sitting had disowned its village headman Yaruingam for violating the native village customary law, Yaruingam should not append his name and signature in the letterhead and seal, village council chairman Meliba Lasuh declared.

Speaking at the press conference on Tuesday evening at Ukhrul town, Soraphung Village Council chairman Meliba and its secretary Silei, who were accompanied by its village council members, alleged that after maintaining complete silence over the last couple of years, headman Yaruingam was found to be using his name and signature in the letterhead bypassing the earlier resolution adopted by the village.

Meliba asserted that the village public sitting held on August 6, 2018 had barred him from assuming the village headman in addition to barring him from using his name and signature in the letterhead and seal.

Elaborating on why he was barred from claiming the title of headman by the native villagers, the village council chairman stated that Yaruingam had sold a plot of field accorded to him which is against the village customary law.

The village council further charged that Yaruingam had replaced the names of five old aged pensioners namely Kewepfa, K Ringshi, VS Wechitiu, VS Aphuni and Vashum Alo with the name of his friends citing that all the beneficiaries have died though they are still alive.

He had also sold various public lands without the concern and knowledge of the public, added the council.

In a letter addressed to headman Yaruingam on September 30, 2019, the letter signed by Soraphung Village Council chairman and secretary had mentioned that the headman had been barred from assuming the village headman title as per the public sitting held on August 6, 2018.

Effective from September 30, 2018, the village headman had been barred from using his name and signature in the letterhead and seal, it added.

The letter also further warned that the village emergency sitting held on September 30, 2019 had resolved to take stringent action against him in the event of violation of the resolution adopted by the public.