Love the country through deeds

No true Indian will chant rhetorical slogans so as to pass the litmus test of “patriotism” as defined by the communal “nationalist” brigade. 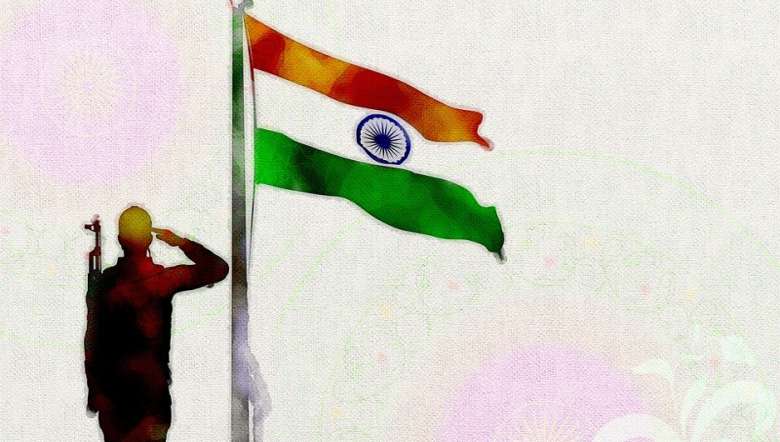 To some "India" might reflect "colonial past", but for many multiculturalism and heterogeneity find its essence in this all-inclusive name! If "national pride" and "love towards the country" remain dependent upon its mere name, then definitely does it advertise a poor sense of pride and love of the "nationalists" towards their motherland!

And our freedom fighters fought hard for independence not to rename the country as "Bharat", but to ensure an environment where all Indians gain freedom from atrocities and discrimination with head remaining high and mind without fear. Why don't the proponents of "Bharat" invest their energy and passion in embracing all citizens as own and protest against discrimination and atrocities all around to prove their true love for the nation!

Moreover what is the definition of the "nation"! It's name, national flag, national anthem and zealous chanting of "My country is Great/Greatest" that too by undermining other nations! Individuals who truly love India do respect each and every citizen of their country by rising above all narrow divisive credential of race, language, caste and religion; lead an honest life and carry on their respective jobs with utmost sincerity and dedication; work for the cause of the downtrodden and tortured lot by drawing inspiration from  the greats like Kailash Satyarthi;  care for the environment and protect nature and greenery.

In the dictionary of true lovers of the nation; national flags or anthems are secondary items as they are nothing but mere symbols. The real nation lies in the hearts and human rights of common people. Instead of taking prompt “offence” whenever the flag or anthem gets “dishonoured”; they feel infinite times more pain when human rights of innumerable poor people, vulnerable children, women, minorities and refugees(displaced by riots or climate change)  get mercilessly trampled under the marauding feet of vested interests. After all those unfortunate brothers and sisters of my land form the real India.

Do the zealous sponsors of “patriotic” slogans like 'Bharat Mata ki jai' cry when their fellow brothers like Mohammad Akhlaque got killed by the brutes for his alleged “sin” of consuming beef? Do the self-declared patriots raise their voice when the dietary rights of certain communities get assaulted or their place of worship gets vandalised? Why do the self-declared devotees of “Bharat Mata” remain mum when our cousins from the North-East get abused, assaulted or killed in the “mainland” or “progressive” cities named Delhi and Bangalore? Are they not sons or daughters of “Bharat Mata”? Rather these “patriots” are the very lot who are working overtime to degrade this multilingual multireligious heterogeneous secular democratic and potentially great nation into a colony of Hindu and Hindi-speakers. This is the very reason why all norms of Hindutva are being barbarically imposed on this diverse nation along with zealous sponsors of Hindi by relegating all other Indian languages into oblivion.

Who will enlighten the dark minds of these rabid zealots that switching off the lights and fans when not in use(be it in home or workplace) is a much greater patriotic task than playing to the gallery of chanting mere slogans in the shrillest voice possible?  Who will teach the “nationalists” about the basic fact that India gets truly assaulted when the Constitutional right of practicing any religion and the Constitutional guarantee of freedom of expression comes under the threat of extinction? Why don’t the “nationalism” of the “patriots” get hurt when vitriolic attacks are launched against the Indians who dare to call a spade a spade and express their anguish over the deluge of intolerance being witnessed throughout the country.

They are merely exercising their right of freedom of speech and expression as guaranteed by none other than the Constitution. If anybody differs with their thought, he/she is welcome to thwart it through debates and forwarding of logic. But by drawing “inspiration” from the Taliban-mindset, the “nationalist” brigade are going all-out to character-assassinate them and  brand them as “anti-nationalist”! By definition of which logic, can those “patriots” afford to beat their own trumpet of “nationalism” despite cold-bloodedly assaulting the very basis of the country i.e. democracy, tolerance and free speech?

No true Indian will chant rhetorical slogans so as to pass the litmus test of “patriotism” as defined by the communal “nationalist” brigade. Rather their all-embracing work, tolerant thoughts and democratic ideals will talk about their dedication towards India. And I desire to end with Rabindranath Tagore’s assertion “Never allow patriotism to triumph over humanity”.

Remember this very person came up with a number of swadeshi songs, including ‘Jana Gana Mana…’, reflecting his deep love for the country. But Tagore’s love for the country was not limited to mere flags or zealous chants of ‘Bharat Mata ki Jai’; but got extended to respect for values, humanity and an earnest yearning for an environment where the mind is without fear and the head held high.

Instead of wasting precious time of the Judiciary petitioning "nationalisation" of Anglicised India, why don't self-declared lovers of the country at first try to love it's people, environment laws and Constitutional values?