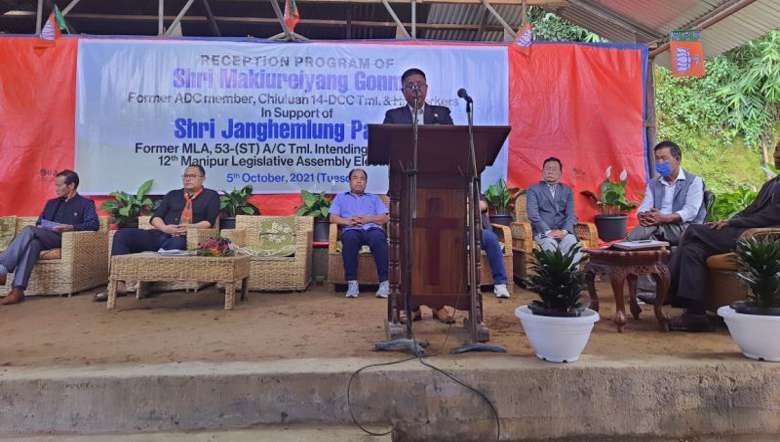 The reception programme was organised after Makiureiyang Gonmei and his supporters declared to extend support to Janghemlung Panmei.

Speaking at the occasion, Makiureiyang Gonmei pledged to work together with Janghemlung Panmei for his success in the coming general election.

“We have to work and fulfil our dreams by supporting those who are selfless. We must prefer the candidates who are born in Tamenglong as they have better understanding of the peoples’ wishes,” he added.

In his welcome speech, Janghemlung Panmei expressed his gratitude to Makiureiyang Gonmei and his workers.

He said that he will work for the peoples’ future and will continue to uphold the spirit of the people. He expressed hope that the joining of former ADC Member Makiureiyang Gonmei and his workers will have a great impact in the forthcoming election.

More than 3,000 supporters gathered in the meeting and many talented local artistes presented songs and dances to entertain the crowd.

The gathering took a strong resolution to elect Janghemlung Panmei at any cost and face any obstacles in the 12th Manipur Legislative Assembly election, 2022.