Vice President M Venkaiah Naidu arrived in Imphal on Tuesday on a one-day visit to Manipur. 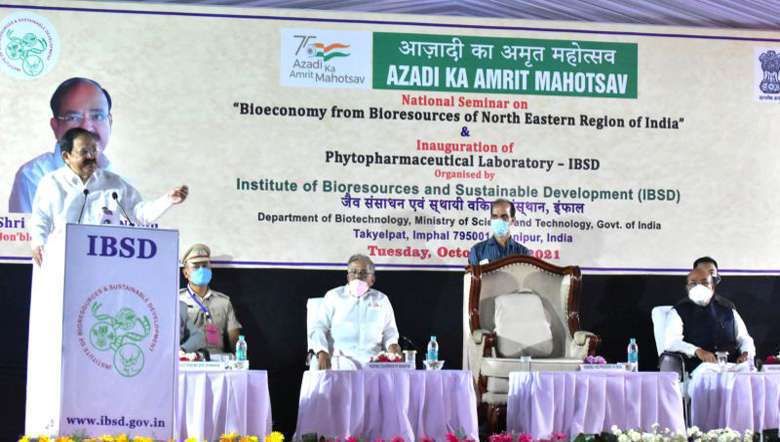 Vice-President M Venkaiah Naidu who arrived in Imphal on Tuesday as a part of his visit to Northeast India, said that India's development is incomplete without the development of Northeast region.

Naidu was speaking as the chief guest during the inauguration of a Phytopharmaceutical Lab at the Institute of Bioresources and Sustainable Development (IBSD) in Imphal and one-day ‘National seminar on Bioeconomy from Bioresources of North Eastern Region of India.’

Naidu also called upon all political parties to support the various developmental projects taken up by the Centre regardless of their political affiliations.

India's development is incomplete without the development of Northeast and Himalayan regions, he said, highlighting the various work and programmes initiated in the region for all round development to make India a strong and developed nation.

Highlighting that the government is directly transferring the funds for all the welfare schemes directly to the beneficiaries without any diversion or dilution, Naidu pointed out the need of opening a bank account by every individual. He also pointed out the need of translating the names of the various welfare schemes in local dialect and to make advertisements in a wide scale to make the local populace become more aware about the schemes.

The basic communication and primary education should also be in mother tongue so that children should be able to think creatively, he added. He also extended his compliment to IBSD for its sterling efforts to sequence the SARS CoV 2 positive samples for not only Manipur state but also for other states of the Northeastern region.

Observing that the Northeastern region is a biodiversity hotspot with its rich variety of ecosystems, Naidu further praised IBSD for managing the bioresources of the region for sustainable development using modern biotechnological tools.

Noting that the Phytopharmaceutical Mission of IBSD will focus mainly on therapeutic areas like antiviral, anti-bacterial, anti-fungal and insect repellents, the vice President opined that this would help in popularising traditional healthcare practices and would also aid in the development of effective alternative herbal medicines to combat diseases like COVID-19.

Maintaining that the further progress of the country rests in the hands of the able scientists, he urged the researchers and scientists to work shoulder to shoulder along with other important groups in pushing India towards development.

Attending as the president of the occasion, chief minister N Biren said that such visits to the state by the vice-president of India clearly re-emphasises the priority accorded by the Centre to the Northeast. Highlighting the various welfare activities undertaken by the state government, he informed that the law and order has prevailed, tourism sector witnessed a great boom in the past few years and Imphal will soon witness railway connectivity.

Maintaining that the Northeast region is blessed with rich biodiversity, he said that the state government is working on with its immense efforts to utilise its fruits and at the same time preserve them.

Lauding IBSD for introducing the first genome sequencing lab in the Northeast region, he said that the state government is looking forward to further collaboration with IBSD in various developmental projects in the future.

Governor La Ganesan while speaking as guest of honour mentioned that the state will soon become a Covid free state, following the various initiatives taken up by the state government in combating the pandemic.

As per schedule, the programme was supposed to start at 11.22 am, but due to a reported delay in flight schedule of the vice-president due to weather issues, the programme was delayed for almost five hours, and the media persons and the invitees had to wait.

In the evening, the vice-president interacted with the Tokyo Olympians from Manipur at the Raj Bhawan and later witnessed a cultural programme performed by the students of Jawaharlal Nehru Memorial Dance Academy (JNMDA).

Ganesan will be spending the night at Raj Bhawan and will depart Imphal for Agartala in the morning tomorrow from Imphal Airport.