Signage that send a hearty laugh

When the vehicle is climbing uphill, it’s actually going downhill. 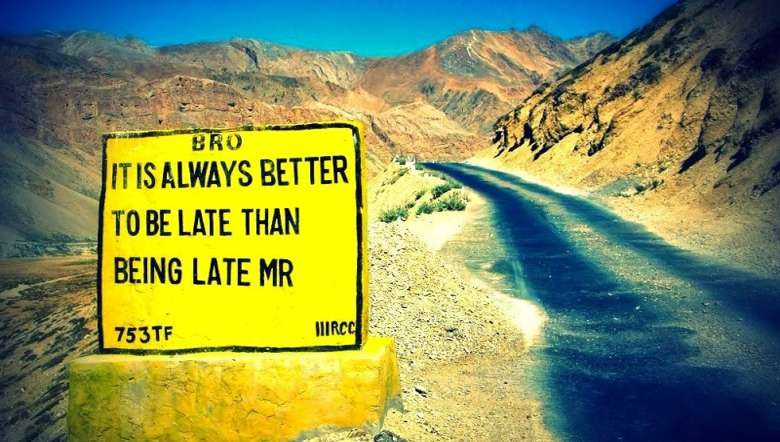 Last summer, we drove down along the groves of Willows and Poplars surrounded by an perpetual view of the mountains. The wonderful panorama of the valley is flawlessly a travellers’ paradise. We reached the point of the strange world “Magnetic Hill”. It’s a perfect pit-stop for tired riders at 14,000 feet after 30 km drive at Leh-Kargil-Baltic National Highway. Visitors often confronted with various road signs on border roads. Soon we stopped our vehicle in the box on the road marked “Park your vehicle”, we experienced the wonder. It was a mind-blowing illusion at driver’s seat observing our static car in neutral gear started moving upward slowly. The phenomenon was unusual that defied gravity. In reality, the hill is no sources of magnetic field; it’s just an optical illusion that makes the downslope of the road leading to the Magnetic Hill. So when the vehicle is climbing uphill, it’s actually going downhill.

The hilly route gave us a smooth ride "Be soft on my curves" at the frontier which reminded me the difficulties in late 90s. There were times when air warriors were airlifted to Leh Airport as there was virtually no road to move where even Angels fear to tread, yet soldiers ventured out into the land of the mystic Lamas. It is Ladakh, Army survive for its daunting task to protect their territory over the land of snow coated mountain peak. Nothing gives a high as intense as high mountain passes in that arid region yet remained soldiers’ first love to their Regiment. The groups of aboriginal inhabitant still in those mountainous regions face hardships amid border conflict however they are still living on the edge today.

City dwellers do not foresee such difficulties, how the lives of folks on the border are living. There’s a lot more to do, but so far, so good. It faces tight funds and uphill goals in tough terrain. Hopefully a quest to improve the plight of border areas has begun. BRO – Boarder Roads Organization has been empowered for construction and maintenance of crucial roads infrastructure for the armed forces in inhospitable terrain. In an unusual gesture, Arunachal villagers forego land compensation for road construction near China border. Those ultra-patriotic Indians are an example for the rest of the country to follow.

People Liberation Army puts up massive signage in the border area to claim it as their land and often got confronted by Indian troops in border areas for encroaching construction work, building structures or writes on rocks and trees. Being in combatant uniform, we had the opportunity to visit far-flung Himalayan border and at the same time it has caught the fancy of tourists on wheel for its innovation for patriotism saying “We cut mountains but connect hearts”.

It is also interesting to find funny and ridiculously witty boards yet conveying serious messages on roads. One of the many signage across the road read “Am curvaceous, be slow”. Isn’t that inspired travellers on road? There is plenty of such signage on road; interestingly they are unusual and looked good too either but have a meaning a lot for safe driving and people involved of unquestionable integrity and patriotism. India and China share three and half a thousand km long border running along Arunachal, Sikkim, Uttarakhand, Himachal and Ladakh. You can have the same feeling either in Tawang (Arunachal), Nathu La (Sikkim) or in Leh. They like those ideas saying “Love thy neighbor but not while driving”. They are actually rejuvenating travellers after a tiring stretch.

The surface access on Sino-India border is closed for half of the year due to heavy snowfall and incessant rain thereby its supplies are possible through airlift only. While China has always been upgrading its border infrastructure, India has not given any importance for long. The bulk works are mostly entrusted to BRO the “Pillars of the Nation” with few numbers of projects to CPWD and ITBP too. Besides roads, the strategic infrastructure includes bridge, tunnels, arfields, mobile towers, strategic railway lines and border outposts (BOPs) in high altitude areas. Project HIMANG is doing great job in Ladakh saying “God made Ladakh and we connect it to rest of the world”.

Since the old existing roads are narrow it is required to realign for a lesser height for vehicles carrying artillery and troop movement. The GREF, BRTF are helping BRO aggressively for tunnel projects and bridges. India is all set to ramp up its infrastructure along the international border in Arunachal Pradesh, Uttarakhand and Ladakh to complete strategic Indo-China Border Roads (ICBRs) but are delayed mainly due to strategic security consideration, environment clearances and limited working season. It has also gone with Jimmy Buffett’s road sign “Without Geography, you are nowhere”

Now 255 km Darbuk-Shyok-Daulat Beg Oldie DSDBO road between Leh and Karakoram Pass along the LAC in eastern Ladakh over the Chinese military buildup is nearing completion that could provide all-weather access. Tourists are not given permission to travel those protected / restricted areas (extreme north) other than the Nubra Valley and Pangong Tso Lake in the East. This writer had the privilege to work in Forward Base Supply Unit THOISE (Transit Halt of Indian Soldiers) en route to Siachen Glacier where the temperature plunges minus 50 degree C. But in summer, fruits of apples, apricots and walnuts bloom. Interestingly, there are no insects or mosquitoes in that sparse vegetation.

Thanks to BRO’s sense of humor that ends up giving a smile after every turn in that rocky terrain. “Haste makes waste” – hurrying will result in poor ending. So we wait for another drive on that frozen highway DSDBO and see some heartier laugh from the signage over the steering wheel.