People for Animals Manipur managing trustee L Biswajeet Meetei stated that the poster campaign was organised to protect dogs which are the most faithful animals as well as Manipuri Ponies which have become endangered. 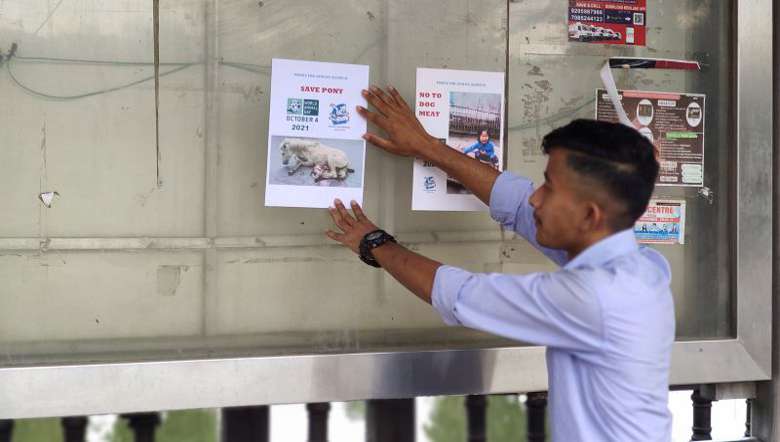 People for Animals Manipur on Monday organised poster campaign on its 10th Foundation Day and as a part of World Animal Day, spreading messages against consumption of dog meat and to encourage the protection of ponies.

People for Animals Manipur managing trustee L Biswajeet Meetei stated that poster campaigns were carried at hotels and popular spots in Thoubal, Kakching, Imphal West and Imphal East. It was organised to protect dogs which are the most faithful animals as well as Manipuri Ponies which have become endangered.

He stated that owners of hotels were advised not to sell dog meat. He mentioned that the state needs to implement laws to enforce strict forms of punishments under Prevention of Cruelty to Animals Act to those who treat birds and animals with cruelty.  Manipur still lacks a law to stop consumption of dog meat and therefore, therefore strong measures cannot be undertaken to stop the consumption and selling of dog meat, he stated.

Manipuri Ponies are also suffering due to the vanishing of grazing grounds and the poverty of their owners. Many horses suffer from road mishaps and accidents as their owners cannot afford to look after them, he further said.

He asserted that efforts and cooperation from everyone is required to save and protect the birds and animals of Manipur, he added.