Modi along with Chief of Defence Staff Gen Bipin Rawat reached Leh around 9.30 am Friday 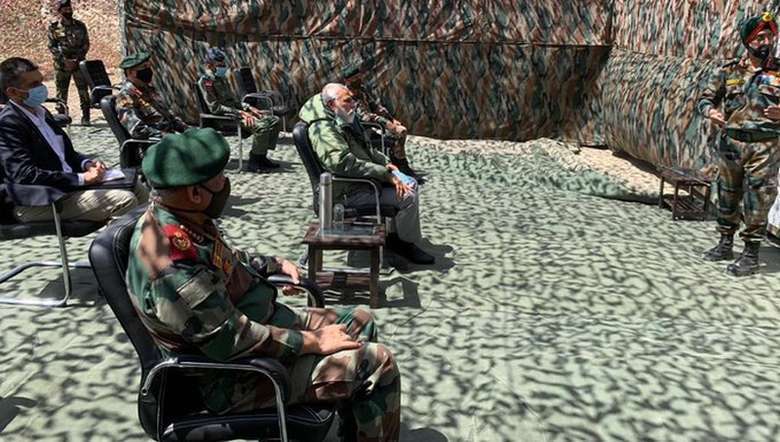 Amid the border tension between India and China, Prime Minister Narendra Modi made a surprise visit to Ladakh with Chief of Defence Staff Gen Bipin Rawat and reached Leh on Friday morning, official sources said.

The prime minister reached Leh around 9.30 am Friday, the sources said, adding that he is meeting personnel of the Army, Air Force and Indo-Tibetan Border Police (ITBP) at one of the forward posts in Nimu.

Recently, Indian troops faced a violent faceoff with the Chinese troops at Galwan Valley in Eastern Ladakh along the Line of Actual Control that left 20 Indian soldiers and 43 Chinese troops killed on the night of June 15.

Nimu is among the toughest terrains, located on the banks of the Indus and surrounded by the Zanskar range.

As tensions between India and China heightened along the Line of Actual Control (LAC) in the past few days, India on June 30 announced ban on 59 Chinese apps.

The ban on Chinese apps was a "digital strike", Union Minister Ravi Shankar Prasad said while addressing a virtual BJP rally in West Bengal. He said, "India is for peace but if somebody casts an evil eye, the country will give a befitting reply... We banned Chinese apps to protect data of countrymen; it was a digital strike".