The CEO and his team of officers apprised the members present about the schedule for the bye-election, the protocol to be followed and various other election related activities. 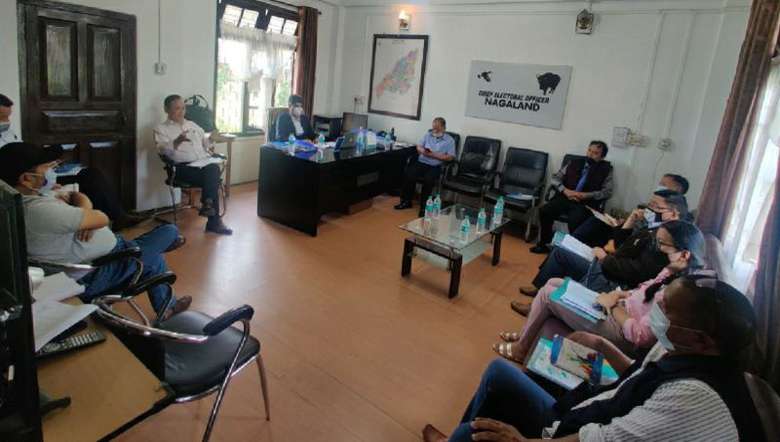 With reference to the Election Commission’s press note "No ECI/PN/83/2021, dated 28th September 2021 announcing the schedule of the bye-election to fill the casual vacancy in the Nagaland Legislative Assembly from 58-Shamator Chessore (ST) assembly constituency, the Chief Electoral Officer, Nagaland, Kohima had a meeting with the political parties at his office chamber on Friday.

At the meeting, the CEO and his team of officers apprised the members present about the schedule for the bye-election, the protocol to be followed and various other election related activities for the guidance of the candidates and the political parties. Various measures to be taken for a free and fair election were discussed. ECI instruction and Supreme Court directions for the purpose were also discussed.

The CEO informed that with the announcement of the election, the provisions of model code of conduct for the guidance of the political parties and candidates have come into force with immediate effect for Tuensang district till the completion of the bye-election.

Briefing was also given about the election expenditure monitoring process which include expenditure related to campaigning like public meetings, public rallies, posters, banners, vehicles, advertisements in print on electronic media, etc. subject to it being within the permissible limit. It was apprised that failure to lodge account of election expenditure will result in disqualification of candidates as per Section 78 of the Representation of People Act, 1951.It was also brought to the notice of the members present that distribution of money, liquor or any other item disbursed and given to the Voters to influence them or any kind of intimidation is an offence both under the Indian Penal Code and Representation of People Act, 1951.

The political parties were apprised about the Commission’s notification about the prescribed timeline for publicity of criminal antecedents of candidates during the period starting from the day following the last date of withdrawal and upto 48 hours before ending with the hour fixed for conclusion of poll. The meeting also discussed the broad guidelines to be followed by the political parties, polling parties and candidates due to Covid-19 during the conduct of bye-election issued by the Election Commission. Brief highlights of the use of EVM/VVPAT were also shared with the political parties.