A Free Film Acting Workshop was held in Dimapur. 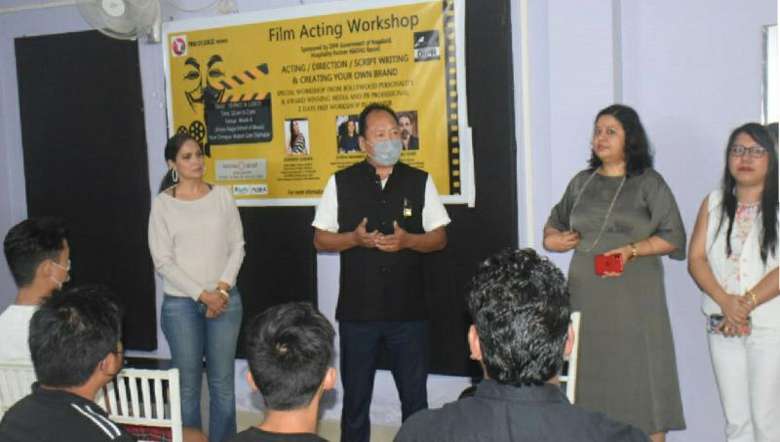 Director, Information & Public Relations, Tokishe Sema disclosed that the drafting of Nagaland Film Policy is in the process where the Nagaland State Film Development Society/Board would be created with members from film lovers, makers, directors, production houses etc. He said this during the concluding day of the second-day free Film Acting Workshop organised by Find Studioz and sponsored by DIPR, Government of Nagaland and hospitality sector partnered by Niathu Resort in Dimapur on Friday.

Stating that Nagaland was blessed with beautiful landscapes and scenic beauties in addition to the rich traditions and cultures, he observed that the colours of Nagaland can be tapped and ready to be explored in different art forms of cinema. Tokishe was optimistic for better funding from the State government for promotion of films in Nagaland. He also informed that the Department of IPR would organise the North East Hornbill Festival 2021, in collaboration with the National Film Development Corporations under the Ministry of Information and Broadcasting.

Further, Tokishe lauded Rebecca Changkija, proprietor, Find Studio Production for constantly training and encouraging the Naga youth in the art of film making and also for promoting films in Nagaland. He expressed happiness to see so many participants in the workshop, and was hopeful that the talents, skills and creativity of Naga youths in the field of film making would be channelized in the right direction with proper grooming and guidance. He also thanked the professionals who came all the way from Mumbai with zeal to guide and groom our youth in the field of cinema.