Pointing out the need of establishing more medical colleges in Manipur, IMA national president Dr JA Jayalal said that IMA will be raising the matter to the Central government. 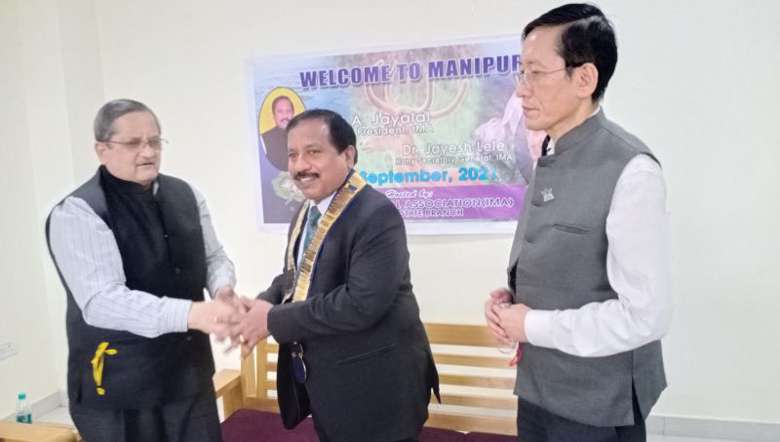 In an effort to encourage medical tourism in Manipur, the Indian Medical Association (IMA) on Wednesday said it will appeal to the Union government to ease travel restrictions on people from neighbouring countries like Myanmar travelling to the state for medical treatment.

Briefing the media at the office of IMA in Imphal, IMA national president Dr JA Jayalal said that Manipur, being a border state with good medical treatment facilities, has a great potential for medical tourism.

Pointing out the need of establishing more medical colleges in Manipur, he said that IMA will be raising the matter to the Central government.

Lauding the healthcare workers of Manipur for their hardships and efforts in overcoming the Covid pandemic, he expressed his deepest condolences for the six Manipuri doctors who succumbed to Covid.

In this regard, he informed that the team had met the governor of Manipur on Wednesday and was apprised to declare those six doctors as ‘martyrs’ as they died in combating the pandemic to save others.

“Moreover, we had also requested to issue survivor benefits to the family members of the deceased doctors,” he added.

Mentioning that the IMA will stand for holistic development of the general public, the national president sought support of the public in taking up any welfare works by the IMA.

The national president was accompanied by the national general secretary Dr Jayesh Lele. During their visit to the state, they will be discussing with the doctors and medical experts to improve the healthcare facilities in Manipur.

Following the press briefing, the IMA leaders interacted with the medical students and junior doctors in Manipur.

As a tradition of IMA, the national president was honoured with IMA National President Medallion.